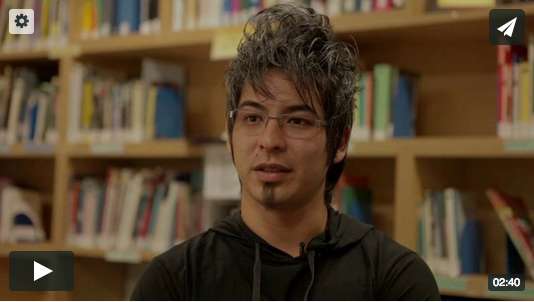 Jalal, whose family are originally from Afghanistan, left Iran, travelled as an unaccompanied 16 year old boy by boat to Australia, and was detained on Christmas Island and in a detention facility in Darwin for ten months. His story is one of loneliness, great risk and ongoing difficulty.

Jalal left Iran where he lived with his family, Afghani refugees who were living without documentation, to risk a long boat journey to Australia in order to seek asylum and a better life. Jalal had been born a refugee in Iran. He describes life in Iran- “The situation for Afghan people in Iran is so bad, so hard to live.” He speaks further, going on to describe the treacherous boat journey to Australia stating, “It was risky and so difficult. I had to cross the big ocean, just with the fishing boat.” Jalal’s life was so bad in Iran that he made this journey alone.

Jalal’s experience of detention has clearly affected him and although now settled in Australia where he is studying English at TAFE, he says, “I’ll never forget the situation in the detention centre.”

* Jalal’s name has been changed.

A long journey to detention – Yusuf in Malta