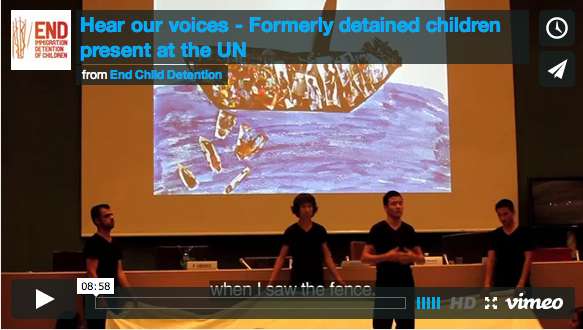 In September 2012, the Campaign held a special event in collaboration with the UN Committee on the Rights of the Child and the Diana, Princess of Wales Memorial Fund to highlight the experience of administratively detained children around the world.

Entitled ‘Hear Our Voices,’ the event took place during the Committee’s Day of General Discussion (DGD) in Geneva and was the culmination of a week-long workshop in which 6 formerly detained children shared stories of their detention with over 25 State parties to the Convention on the Rights of the Child, five key UN agencies, and 120 participants.

The short version of the performance can be viewed here:

my world was dark, I felt scared,

I felt I am nobody, I be broken

In detention centre everybody thinks they are nobody”

Except from ‘Hear Our Voices’ in which Amin describes his experience of detention.

Importantly, the event was attended by the Deputy Commissioner for Human Rights, Kyung-wha Kang, and the Chairperson of the CRC, Yanghee Lee, who both committed to further pushing this issue within the Human Rights Council in the coming year. Due to the dialogue around child detention and commitment to pursue alternatives which took place at the DGD, the resulting CRC report included the strongest recommendation to State partied to the CRC that we have seen to date:

Many months after the event, a participant in the event Mariane Quintao,  contacted IDC with this reflection on her experience,

“I remembered our hard work and effort onto helping these kids speak out. Once again, I was more than thankful to have contributed to such a gratifying work. I really do emphasize this often: It is more than an honour to me to have had the opportunity to contribute to the campaign. I couldn’t be more thankful!”

Strong Language From The CRC