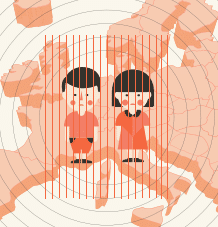 Europe is facing unprecedented numbers of migrants seeking protection, many of them children.

It’s being called the ‘migrant crisis’.

While everyday more people seek refuge, it is estimated that more than 40,000 children are detained in Europe every year.

But what are the solutions for children flee from their homes?

The Parliamentary Assembly of the Council of Europe (PACE) is holding a Roundtable on alternatives to immigration detention of children.

The roundtable is organised as part of the Parliamentary Assembly of the Council of Europe Campaign to End Immigration Detention of Children.

It will explore the application of the United Nations Convention on the Rights of the Child which called on states to “expeditiously and completely cease the detention of children on the basis of their immigration status” and “adopt alternatives to detention that allow children to remain with family members and/or guardians in non-custodial, community-based contexts while their immigration status is being resolved, consistent with their best interests, and with children’s rights to liberty and family life.”

The roundtable will also explore the EU Reception Conditions Directive (RCD) which obliges member states to not detain a person solely because he or she is an asylum applicant (Art 8.1). Detention is only permissible when less coercive alternative measures prove ineffective, and on the basis of an individual assessment of each case.

If you feel passionately that detention is a grievous violation of human rights: sign the global petition now.