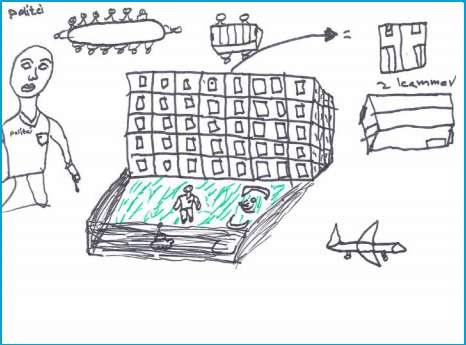 During the roundtable discussion on the topic of migration on the 20th of November 2014 the question was discussed: ‘How to reduce the considerable damage that the asylum procedure and the family location inflict on children?’

This question was divided in three subtopics; relocations, the need for identification and the impact on parents. In the Netherlands the “family location” is where families are placed while awaiting their immigration outcome. The centres allow families to reside together although they restrict freedom of movement.

Children in asylum procedures are forced to move constantly. For example, Giorgi and his little brother have moved six times over eight years. Giorgi’s little brother has a lot of difficulties adapting to each new school and keeping track of the school program every time.

The solution should be that every family is accommodated in one asylum facility and remains there until the end of the procedures, whether asylum has been granted or the family has to leave the country. This could be accomplished by raising awareness trough a media campaign, lobbying or by creating a documentary on the difficulties young asylum seekers encounter.

The majority of people residing in a family locations do not have an ID card.

Several examples (names protected) were made by the Youth Council:

One of the solutions proposed was to create a special ID-card for asylum seekers, also for the ones that have exhausted all legal procedures. This special ID would have written name and nationality, and all the rights that (rejected) asylum seekers have: the rights to healthcare, an education, etc. There could also be a phone number on this card where people could call to receive more information, noting that not all police officers are up to date on the rights of asylum seekers.

“It happens too often that children have to translate and become aware of information that is not meant to be heard by children’s ears.”

Minors suffer a lot of damage because of the stress and harm caused to the parents. They also face a lot of difficulties because they often have to translate for their parents, exposing them to the upsetting confidential information of the asylum procedure. These procedures are stressing for the parents, resulting in depressions and a other health problems. As a consequence, the older siblings have to take over the parental duties, for example bringing their younger siblings to school before they themselves go to school, because the parents are often too depressed to do ‘every day tasks’.

Proposed solutions include finding a way to give ‘the parental role’ back to parents. Adults don’t have a day program and cannot leave the family location because of the duty to report every day. They become ‘passive objects’ in the family locations. The aim is to increase their self-esteem and self-reliance by providing them with a day program. A day program could include, for example, Dutch classes, learning other subjects and/or a physical activity.

Additionally there should be a preventive help service stopping by from time to time to ask families if everything is still going well. A Dutch court decided recently that a family location had caused immaterial damage to Dutch minors residing there with their mother. The aim is to continue litigating and include all minors; immaterial damage does not depend on nationality. Children should also be exempted to translate for their parents. It happens too often that children have to translate and become aware of information that is not meant to be heard by children’s ears. Children should be allowed to be children and it is a State’s duty to provide for a proper translator.

More about the conference.

Drawings By Themselves: A Self-Portrait of America
Scroll to top