EL SALVADOR: A YOUNG COUNTRY WITH A LONG HISTORY OF MIGRATION

Almost 40 % of the population of El Salvador are children under 18 years of age.

Unfortunately, as in other countries of the Northern Triangle, many of these children grow up in unsafe environments. 90% of all homicide victims in the country are adolescents, many of whom are casualties of the persistent violence between the two main rival gangs (MS-13 and Barrio 18), or between these gangs and police or military forces.

In February of 2015, police representatives publicly announced that the country was ‘at war‘. This outrageous violence, combined with social exclusion and extreme poverty prevent children from achieving safe and healthy development.

As a result of this insecurity, high rates of children have been leaving their homes to seek safety in other countries.

The need to reunite with their loved ones, the threat of violence, and the aspiration for a better future are common elements that lead children and adolescents to make the decision to leave El Salvador.

A 9-year-old Salvadoran child and his 11-year-old cousin traveling with a “coyote” or trafficker that is leading them to the United States. Source : Swanson , K. et . al ( 2015 ) A Year After Obama Declared a “Humanitarian Situation” at the Border, Child Migration Continues.

Unaccompanied children detained at the U.S. southern border, by year and nationality

Once apprehended , many children are deported back to El Salvador. Between June 2014 and May 2015, the Salvadoran Institute for the Integral Development of Children and Adolescents (ISNA) received almost 4,000 children and adolescents who were repatriated to El Salvador from the United States and Mexico.

On Mondays and Fridays, buses full of returned children make their way from Mexico to the Migrant Attention Center (CAIM) in El Salvador. Each week, 50 children, and at times more than 100 are returned to El Salvador from Mexico. After having been locked up in detention centers and spending more than 12 hours traveling, these children are sent back to the country they had wanted to leave.

Unfortunately, there are many obstacles to their their resettlement and reintegration. Despite government efforts to establish effective reception procedures, once deported, children often face the same circumstances that caused them to migrate previously, and cases are often seen where they will migrate again.

Children who have been deported more than once are at risk of being deprived of their freedom while ISNA works to reunite them with parents or guardians. Mothers, fathers and guardians of deported children can be fined $6,000 to $ 12,000 (USD) by the Salvadorian government.

But fines, detention and deportation are not the answer. We need regional solutions that respect the rights of all children and families. 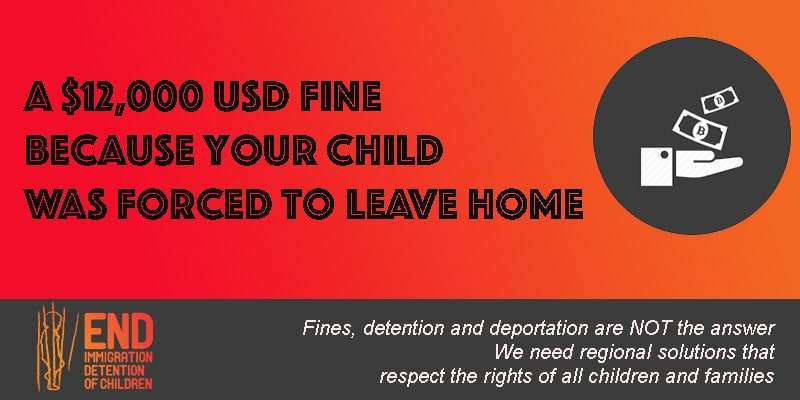 MIGRANT CHILDREN IN EL SALVADOR CAN BE DETAINED

El Salvador is a common migration route, with many children from other countries traveling through. It is also common for Hondurans and Nicaraguan children to enter El Salvador to work or seek medical attention.

Some of them travel with their families and others migrate alone, but all children without proper documentation are at risk of being detained.

Once apprehended, unaccompanied children or children who have been separated from their parents are not held in the immigration detention center. Rather, they are transferred to ISNA shelters. Still, they are not allowed to leave the shelters. Likewise, children who travel with their parents or guardians are at risk of being locked up with their family members in the immigration detention center.

Children should never be detained for immigration purposes. We need better solutions.